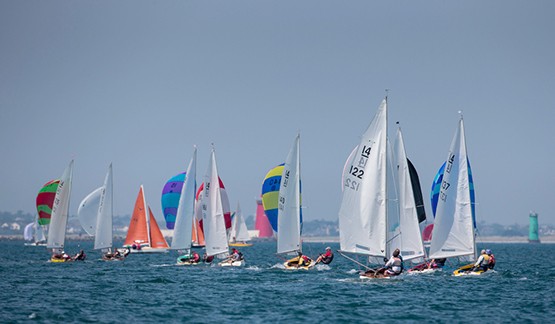 IDRA 14 sailors will be involved in a host of activities this year to celebrate the 70th Anniversary of the class.

A series of events, both on and off the water, will be held to mark the birth of the class which held its very first race in Dun Laoghaire 70 years ago.

The line-up of activities for 70th Anniversary will culminate with a Gala Dinner this Autumn in your Club, the Club which hosted the first IDRA 14 race. With IDRA fleets racing actively in Clontarf and Sutton, as well as Dublin Bay Sailing Club, the birthday celebration events will be taking place on both sides of Dublin Bay, including a special Birthday Weekend in Clontarf Yacht and Boat Club in early September.

Another highlight during the birthday celebration of the class is set to be the launch, proposed for June, of first wooden-hulled IDRA 14 to be built in almost 40 years. In a class which prides itself as being “classic and progressive”, both wooden hulled IDRA 14s and GPR boats compete, although the IDRA class has long since dropped the centreboard weights in the original design, to bring in the trapeze and spinnaker.

The 70th Anniversary of the IDRA 14 will also be marked throughout all the class’s regular calendar events, including regattas in Dun Laoghaire, Sutton and Clontarf (with IDRA sailors often sailing across the bay in groups to support each other’s events), as well as the Rostrevor Northerns on the June Bank Holiday weekend and the IDRA 14 Nationals, being held in Dromineer, on Lough Derg, this year.

The IDRA 14 Class came about when a group of sailing enthusiasts, who had been volunteering together in Slua Muiri, the Irish Navy Reserve force, during the Second World War, decided to set up an organisation to promote dinghy racing in Ireland. One of the first tasks of the newly formed Irish Dinghy Racing Association was to have an Irish one design dinghy which could be raced nationally. There were a number of one-design dinghies, including Waterwags, and Mermaids and the Shannon-One-Design, but no one class was raced everywhere.

The new association settled on the design of the Irish naval architect, George O’Brien Kennedy, with some adjustments being made to his prototype, the “Fuss”. The class was given the name IDRA 14 after the new association, with the intention that there would also be an IDRA 18 and other length dinghies to follow. The class went on to be raced in as many as 17 different clubs in Ireland. The Irish Dinghy Racing Association became renamed the Irish Yachting Association and eventually the Irish Sailing Association, now also having a history going back 70 years.

Article and image courtesy of Afloat.ie, Ireland’s No.1 sailing, boating, and maritime magazine.