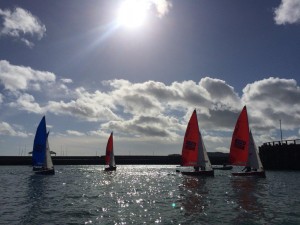 In the finals, it was Gonzaga versus Kilkenny and this went to the wire, with both teams having a win each. Now we were down to a nail biting 3rd race in which Gonzaga took the spoils. This was the second time running that Gonzaga have won the Leinster Schools Trophy. Commiserations to Kilkenny who gave Gonzaga quite a challenge.
The top four teams qualify for the Irish Schools Team Racing Championships which will be hosted at the F.O.M.E.C. sailing centre in Schull on the 9th & 10th of April.
Adam Hyland (R.S.G.Y.C.) was the Race Officer and did an excellent job of completing the event, with a number of wind shifts throughout the day. Ailbe Millerick was the Chief Umpire and was assisted by Dave Sheahan.
Thank you to everyone who assisted in the organising and running of the event.

All the competitors deserve acknowledgement for the lovely manner in which they conducted themselves both on and off the water throughout the event.

The final results were as follows: