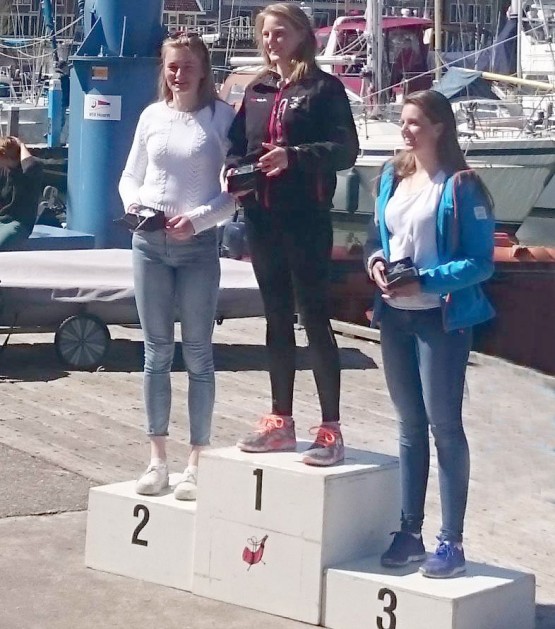 Aoife Hopkins (centre) was overall winner of the women’s Laser Radial Europa Cup fleet last weekend in Holland. The Howth youngster was best under–19 too. It wasn’t the only Dutch performance from the Irish youths either, Liam Glynn was third in the under–19 boys fleet.

Ireland’s next generation of Olympic sailors – male and female – will be in action on Dublin Bay in three months time when 400 of the world’s top youth helms compete for the 2016 KBC Laser Radial World Championships.

Strong Irish performances abroad are giving rise to local hopes that the landmark dinghy event could bring further Irish Under 18 success this summer.

In the girl’s division, with 63 entries from 22 countries, another Howth youngster Aoife Hopkins, a former Olympic trialist for Rio, will be a leading Irish hope in a team of six that also includes Irish youth champion Nicole Hemeryck of the National Yacht Club in Dun Laoghaire.

The KBC Laser Radial Worlds Championship promises to be the biggest sailing event in the country this year, jointly hosted by your Club and Dun Laoghaire Harbour Company. Over 30 nations will compete and any Irish challenge for the world titles faces stiff competition.

Six of the top ten boys from the 2015 championships in Canada are signed up for the Dublin Bay regatta. This includes talented Australian youth champion Conor Nicholas, who travels to Dublin to defend his world title. Nicholas, a double national champion from Perth, leads a ten–strong Australian team that also includes top ten finisher from 2015, Finnian Alexander. A past 4.7 rig world champion, Nicholas has ambitions to represent Australia at the Tokyo 2020 Olympics.

Italy are also on form with fourth and fifth placed Paolo Giargia and Umbreto Varbero returning to the fray as part of an 11–boat Italian squad.

As well as these strong gold fleet performances, the young Irish sailors are also credited with some other strong international results over the past 12 months, heightening the prospect of a top Irish placing on home waters from July 23–30.

McMahon only narrowly missed out on the boy’s European (under 17) Laser Radial title in Portugal last year and in April this year, Royal Cork Yacht Club’s Johnny Durcan took a top ten at the massive Laser Eurocup event in Hyeres, France.

Last weekend, Aoife Hopkins scored an impressive Europacup victory in Hoorn, Holland. Hopkins was overall winner of the women’s fleet at the weekend and best under–19. It wasn’t the only Dutch performance from the Irish youths either. Liam Glynn was third in the under–19 boys fleet.

Looking back at the archives, Ireland has previous success at World Radial youth level. Seven years ago, Wexford’s Philip Doran took the Under – 17 world championship title in Japan. A year earlier he won the Under 16–title. In that same year, 2009, and at the same venue, Annalise Murphy, then aged 19, won the Under 21–world title. These results have subsequently been followed by three youth world sailing medals in the past four years, putting Irish youth sailing achievements at an all time high.

On the Irish circuit, after a blown out Munster Laser championships in West Cork earlier in March, the combined 30–boats that make up the Irish Radial team were racing again at a breezy edition of the Ulster championships in County Antrim in late April. In a nip and tuck battle, Ulster man Glynn finished ahead of McMahon for the Radial provincial title. Royal Cork’s Johnny Durcan was third.

Image and article courtesy of Afloat.ie