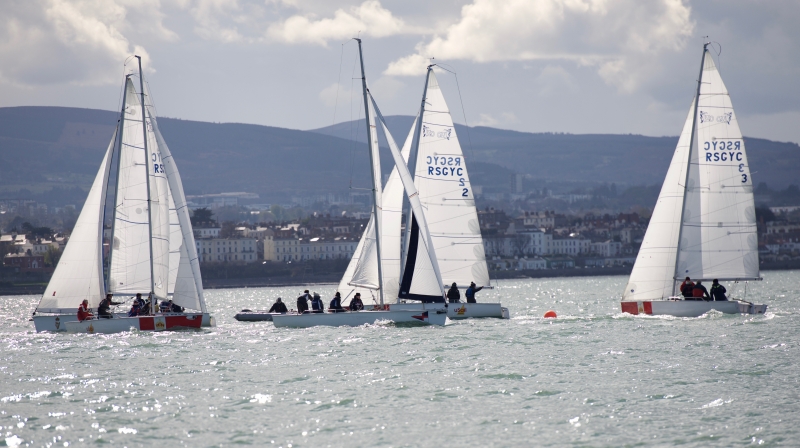 Some Members of the George prefer racing their yachts, and some prefer to take them on a cruise. Frank O’Beirne, our Rear Commodore, decided that it was time for the cruising men (and women) to compete in an event which looked like a race, and the racing men to take part in a cruise. Frank reckoned that the day could not succeed unless he called up more than a month’s share of sunshine and warmth. Frank seems to have a special skill in the weather department, and we had a day with an air temperature of over sixteen degrees. In Ireland one of our biggest weather problems is that even on a good day, wind chill takes the edge off the air temperature. Unfortunately for the yachtsmen on Sunday, there was no wind chill, because there was almost no wind at all.

Sunday 8th of May was the day of the Beginning of Season Event. (BOSE). What was the format of the event? A course was set for slow boats around Dalkey Island and fast boats to Killiney Bay, and every class was given an appropriate start time. Each competitor was provided with a ‘Communication Form’, in which to write down the names of other competitors. The objective was that competitors would link up with the crews on the other boats, and ask them to answer a few key questions.

The fact that there was no wind, resulted in all the boats travelling with the spring ebb tide at the same speed to Dalkey. This resulted in insufficient inter-boat communications, which was a pity on such a lovely day. It turned out to be a perfect trial run for next year’s BOSE.

Prizes were awarded not to race winners, with to competitors who made a name for themselves. Ian Bell’s Squib Astrix, drifted to the starting line with exact timing. Glenshane’s mainsail drop deserved a prize. David Freeman’s Twocan won the singlehanded trophy. Howard Knott’s Calypso was the best communicator. The Katie Nua team won the award for confusing the organisers by getting their ‘Communication Form’ in late. Paul Conway’s Cervantes won the prize for not having any Jonathan Swift, Beckett, James Joyce or Graham Norton on their communication form. Una O’Dwyer’s Escapade won the Green Party prize, for cleaning the oceans. Birmayne took the ‘Work of fiction’ award.

Next year look out for the advance notices for this fun event for keelboats and dinghies including parent and child entrants.

Meanwhile, Frank, talk to the sun gods and the wind gods in time for this year’s regatta.