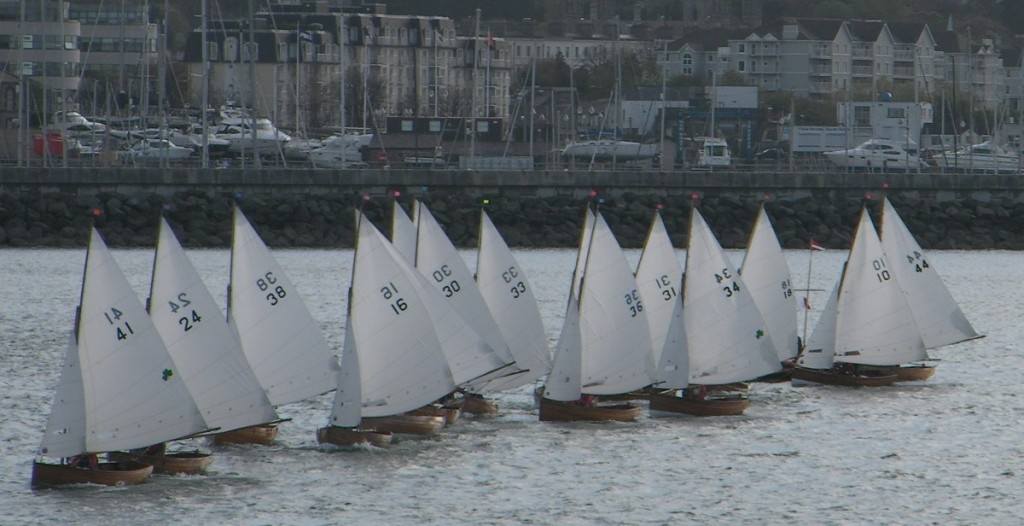 It was the Royal Irish Yacht Club Regatta. Unlike other classes the Water Wags compete in the regatta on Wednesday evening. At a quarter to six, there was not a breath of wind on the harbour. Tom Hudson and his crew on the committee boat went out anyway and laid a course.

Air temperature was in the high teens and the sun was out. It was a good evening for a sail. Twenty-one Water Wags launched. The unstable wind was offshore from the south-west.

Twenty-one Water Wags launched. The tide in the harbour was ebbing. The unstable wind was offshore from the south-west.

By starting time at 18.45hrs., the breeze had picked up to at least 6 knots. For the first start, the Little Tern and others were premature starters, and a general recall was enacted.

At the second start, there was a definite bias at the pin end of the line, so that is where Mollie was stationed to get away cleanly. But it wasn’t to be, as there was a pile up caused by several Water Wags shooting the RIB located at the pin mark. The Water Wags starting 12 boat-lengths back along the line were able to start at speed, to clear the bunch up at the pin mark and streak away. It appeared that the closer one went to shore that the wind lost pressure, so several tacked onto port. Vincent Delany and Hilary Williams in the 110-year-old Pansy managed to cross the starboard tackers who started nearer to the committee boat. At the windward mark, the order was: Pansy, Gavotte, Mademoiselle and Moosmie.

On the off-wind leg, the wind went slack, so good spinnaker handling was important. At the end of the second beat the order had changed to: Pansy, Gavotte, Moosmie and Little Tern.
The wind collapsed completely on the second run, and when gusts appeared, the directions was not predictable. At the finish at the end of four beats and three runs, the order was:

At the finish at the end of four beats and three runs, the order was: