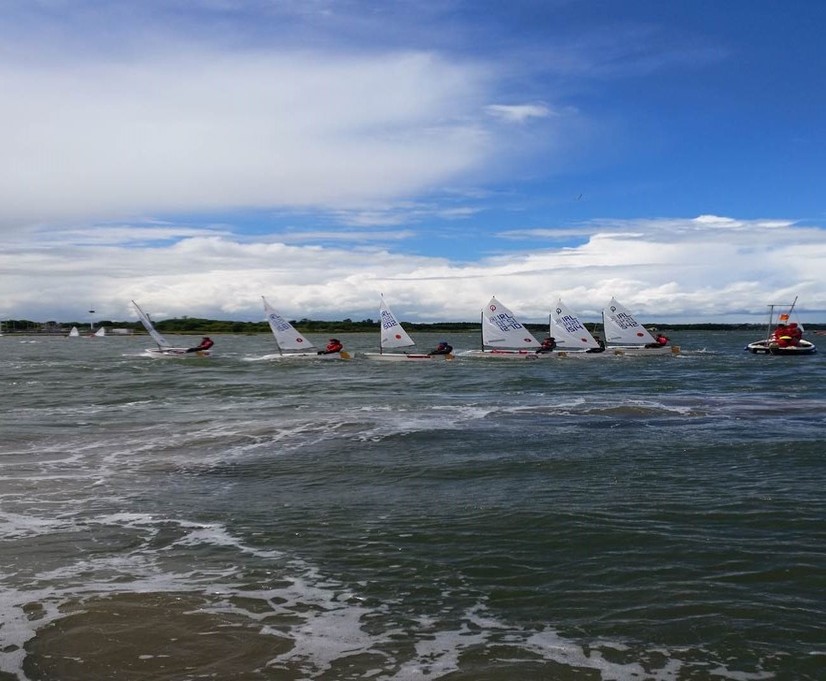 George One versus George Two

Four teams from the Royal st George YC arrived at Malahide Yacht Club on Friday to compete for the Vice Presidents Cup in 20+ knots of breeze.

The ability of the sailors ranged from the experienced team racer to the complete novice. Teams were divided into groups of four sailors. The winds were a lot stronger than we would have hoped for with some of the gusts touching 28 knots.

The preliminary races got underway with all four George teams performing quite well with at least one win for all teams.First of our teams to leave the course was Team 4, beaten by Howth team 4. This was everyone in Team 4’s first event and they did very well to stay in as long as they did. Team 3 were performing well until they were put up against Royal Cork 1. This match ended their hopes of reaching the semi-finals. At this stage, both George 1 and George 2 were holding on to their 100% records, with three wins each.

Team three were sailing well until they met Royal Cork 1. This match put an end to any chance of George 3 progressing to the semi-finals. At this stage, both George 1 and 2 still had 100% records with four wins each.

The semi-finals were beckoning. Incredibly it was to be George 1 versus George 2 and Royal Cork 1 versus Royal Cork 2. The best of three races. The Cork teams were first to compete. Halfway up the first beat, they were hit with 30 knots of wind leading to the race to be abandoned. Royal Cork 1 went on to win the two races and Royal Cork 2 sailed to shore.

Next came the turn of George 1 and George 2. The first race was very close with only one point dividing the teams at the finish, George 1 taking the honours. Unfortunately for George 2, the next race finished the same with just one point in it. Home time for George 2.

The final was to be decided over five races, the winner being the first team to win three races. Race one went to Royal Cork 1, George 1 taking 2nd, 3rd, 6th, and 8th places.

Race two started only to be hit with another big squall, hitting 26 knots and sending half the fleet into irons. The George sailors managed the situation better and took 1st, 3rd, 6th, and 7th. One all. Unfortunately, this was as good as it got for George 1. Royal Cork 1 took the next two races to become the deserving winners of the Vice President Cup.

This was a fantastic and exciting competition for all involved. All sailors did very well and did the RSGYC proud.

The RSGYC teams were as follows:

Report and Image by Sean Flanagan