Congratulations to Henry Start and Morgan Devine who won the McCready Sailboats Irish RS Feva Nationals, hosted by Greystones Sailing Club from July 18th – 20th. The event was sailed mid-week this year in order to attract as many young sailors as possible – this proved successful with 38 boats turning out to compete in the event. Monday was very challenging, with 3 races sailed in winds gusting up to 23 knots at times. In contrast, a complete lack of wind on day 2 resulted in no sailing, but lots of fun on shore with water and land based challenges instead, in brilliant sunshine. Day 3 saw 5 races in fantastic sailing conditions just outside the harbour, with a perfect viewing platform on the balcony of the new Greystones SC clubhouse. 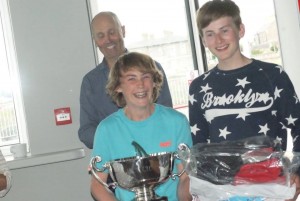 Morgan and Henry were carrying an OCS into the second day of racing but, with 3 wins out of the 5 races sailed and two discards kicking in, they won on countback from Eddie and Kevin Farrell from Llandudno Sailing Club. Sailors from the RSGYC took 4 of the top 5 places, showing the benefit of all the Feva training which has been taking place in the club over the past year. Jamie Matthews and his crew, Adam Rochford from the RIYC, came 3rd overall with newcomers to the class, accomplished Optimist sailors Ben Hogan and Morgan Lyttle, coming 4th. Iseult Cambay was first girl in 5th position overall, with Con Murphy and Luka Flanagan in their first Feva event coming in 8th position.  Well done to all our sailors. The general consensus was that it was a fantastic event – sunshine, wind and great competition. The prizes were awarded by Sean Craig, who presented the perpetual Jack Craig trophy to the winners.