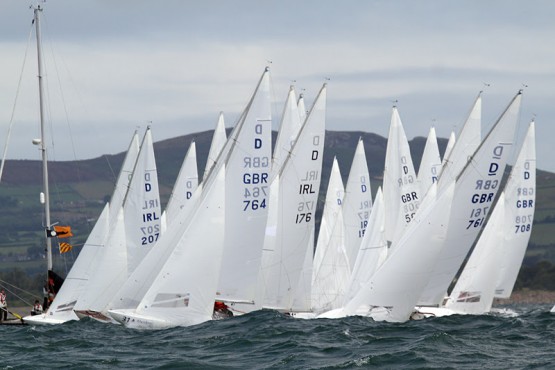 36 boats are competing for Edinburgh Cup honours in Wales

Martin Byrne’s Jaguar Sailing Team from the Royal St. George Yacht Club had a second and third in the first day of racing at the Dragon Edinburgh Cup in Abersoch today.

Byrne, together with crew Adam Winkelmann and Donal Small, lie in second overall, just one point behind former World Champion, Lawrie Smith, who finished first and third today at this early stage of the championship.

As Afloat.ie reported previously, five Irish Dragons are competing in the 36–boat fleet. Clare Hogan had a fourth place in Race two. Irish Dragon Champion, Neil Hegarty, was disappointed to be scored OCS in the same race following a 17th in Race one.

Racing continues until Friday with lighter conditions forecast for tomorrow.

The 2016 Dragon Edinburgh Cup, supported by Gwynedd Council and the ‘Wales 2016 Year of Adventure – Snowdonia Mountains & Coast’, got off to a fantastic start in Abersoch with two races in a 12-18 knot northerly wind and plenty of sunshine. The South Caernarvonshire Yacht Club’s race committee did an excellent job with the courses in the shifty offshore breeze and the 35 strong fleet made the most of the opportunity for some great racing.

With two of the six scheduled races completed, Lawrie Smith’s first and third put him into a single point lead over Martin Byrne with Grant Gordon three further points back in third place. Gavia Wilkinson-Cox finished race two in ninth and lies in fourth place, one point ahead of Rob Campbell who leads the Corinthian Division as well as lying fifth overall, and two points ahead of Paddy Atkinson. The top ten is rounded out by Oliver Morgan seventh, Mike Budd eighth, Mark Dicker ninth and Clare Hogan tenth.

Paddy Atkinson and Seafire’s performance is particularly rewarding for owner Neil Lamont who is not able to race this week. Neil suffers from Parkinson’s Disease which currently prevents him from sailing and so he is using the event to promote awareness of and raise funds for Parkinson’s research. Neil has donated a stunning Charles Bell original watercolour of Dragons sailing in Abersoch Bay which will be auctioned at the Edinburgh Cup Prize Giving Dinner on Friday, and at Wednesday evening’s Champagne and Canapes Party there will be a raffle for a Nebuchadnezzar of Tattinger Champagne with all proceeds going to Parkinson’s Disease research.

Racing continues until Friday 8 July with a total of six races scheduled and a single discard coming into play after the fourth race is completed. Two races are planned for Wednesday when the wind is expected to swing into the south-west and to build from around 12 knots at the start of the first race to the mid-teens with gusts up into the low twenties by late afternoon.