Tom Higgins was crowned 2016 Volvo Gill Optimist and British Open Champion after five days of world class racing in Largs, Scotland from the 30th July to 5th August, 2016. The event was attended by international teams from Ireland, Spain, Portugal, the USA, Australia, Hong Kong and Mexico. Tom is the first ever senior Irish Optimist sailor to win the title.

The conditions throughout the week were challenging and variable ranging from light to breezy but expertly managed by olympic PRO Peter Saxton who ran 14 top class races.

As the week progressed Tom took the lead and did not let go building steadily to finish with a decisive win.

On one of the numerous trophies won by Tom his name will now join no less than that of Sir Ben Ainslie.

Tom’s magnificent win is the culmination of a number of years of hard work and determination under the close supervision of coaches Thomas Chaix and David White whom he thanked along with his parents in his victory speech.

But Tom was not alone – Trevor Bolger, Iseult Hogan, Oscar Lubliner and Moss Simington were members of the Irish Under 12 Squad competing in the Junior Fleet. Moss Simington finished in an impressive sixth place and Trevor Bolger (who had been in the top ten for the majority of the week) finished in thirteenth out of a fleet of 122 sailors.

And it does not stop there! In the Regatta Racing fleet Russell Bolger finished second and Jessica Riordan finished a close third. Harry Lubliner made his debut in the Mini Racers while his elder sister Eibhe won a magnificent trophy for the most improved sailor in the Regatta fleet.

Well done to all George sailors who competed in the event. 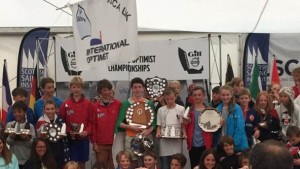