It was a slow start with low winds predicted for the day. In total 6 teams competed; two teams each from Sutton sailing club, the National Yacht Club and The RSGYC which was a great turnout. This was the second attempt at the event – two weeks previously the event had to be abandoned due to lack of wind.
Unpredictable winds posed difficulties for the race committee to lay the course. However winds picked up as the day went on. After a competitive round robin the teams progressed to finals which was a head on head between the two teams from the George- with Team 1 led by Henry Start and Team 2 led by Iseult Cambay.
In the finals it was a good start from both teams but then two boats collided from team George 1 which led to a 1,4,6 for this team. But inspired team racing skills and excellent team work George Team 1 won in what was a closely contested contest.

Congratulations to Luca & Kitty Flanagan on the winning team & a great result for Team George! 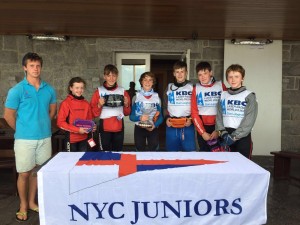 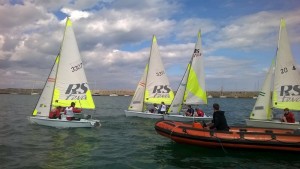