Three Royal St. George sailors as part of a six strong Irish team have just returned from the 2016 Laser 4.7 World Championships in Kiel, Germany. Henry Higgins, Toby Hudson-Fowler and Peter Fagan competed in a fleet of 256 sailors over six days of racing.

After four days of qualifying races in testing and varying conditions the fleet were split into four for the last two days of the finals series. Henry Higgins competed in the gold fleet with Toby Hudson-Fowler and Peter Fagan competing in the silver fleet. All the boys continued to put in strong performances during the final series. Congratulations to the boys. 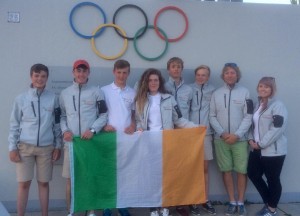