10 teams, comprising many of the country’s top youth sailors, competed for the second Elmo Trophy in the Royal St George Yacht Club last weekend. A windy forecast for Sunday meant for a long day on Saturday. Light winds made for challenging conditions for race officer Peter Bayly, but all in all it was a great day of very high quality team racing and all the races from the preliminary leagues were completed.

The experienced Schull team (with the Durcan brothers and Florence Lyden at the helm) set the early pace and dominated the first day where each team sailed 8 races. Joining Schull in the Gold League on Sunday were Team 420sOut (a team of recent 420 sailors captained by Douglas Elmes), the National Yacht Club team captained by Daniel Raymond), Toby Hudson Fowlers’ George Indigo, and the youngest of the 4 RSGYC teams, George Magenta, captained by Peter Fagan.

Blue skies and fresh breezes on Sunday saw Storm sails fitted, and race officer for the day, Ger Owens, managed to get a full round robin in for both the Gold and Silver fleets in freshening winds. Credit is due to all of the teams who managed to still produce some excellent team racing in challenging conditions. The Gold final saw Schull Sharks victorious over 420’sOut, with the RCYC team beating Rush Sailing Club in the Silver final.

All in all a great weekend of sailing was had by all involved and the growth of the event is a testimony to the level of interest in team racing amongst our talented young sailors and to the work done by organisers such as John Sheehy and Elaine Malcolm. It is great that the event gets young sailors involved and creates a community for all to enjoy, all in remembrance of the late Graham Elmes who surely would be proud of the event’s continuous growth and great atmosphere. 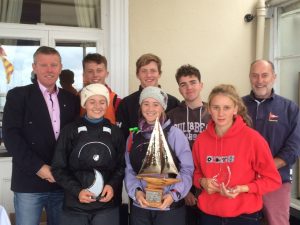