“Your boat turns upside down and you’re there, holding each other, thinking for a split second, that seems to last for an eternity, ‘is she going to turn upright?’”

Former RSGYC Club member Nick Dwyer and his partner Barbara Heftman, who worked in the RSGYC Boathouse last winter, were recently rescued off the coast of Sydney. Nick and Barbara were en route to Sydney from New Zealand as part of a ten-year circumnavigation. Both very experienced sailors got into difficulty after the loss of their rudder was compounded three days later with extreme wind and sea conditions. After three days without steerage and deteriorating conditions led to capsize they took the unenviable decision to activate the EPIRP. Fortunately for Nick and Barbara they were rescued up by the NSW Police rescue vessel with the “absolute heroes” who travelled more than 200 nautical miles in treacherous seas to save them.

We would like to wish Nick and Barbara all the best at this difficult time and hope that they might be able to recover VAL Nick’s Yacht. 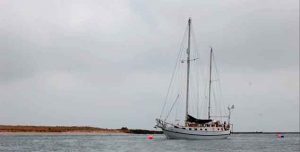 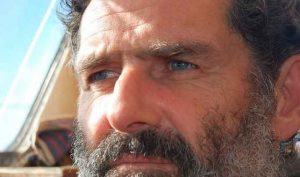 Below is some additional information from Nick’s brother, Club member David Dwyer:

“Your boat turns upside down and you’re there, holding each other, thinking for a split second, that seems to last for an eternity, ‘is she going to turn upright?’”

Nick, my brother, who started sailing from the George circa 1970 has been undertaking a circumnavigation for the last ten years.

Nick has been with his partner, Barbara Heftman, on their boat, “VAL”.  Nick and Barbara abandoned ship on Wednesday evening, off the coast of Sydney. Leaving their home, their life, to drift in the Tasman Sea. He spoke on ABC and Sky News about this week’s events, linked below:

She is a “Spray” replica, the boat on which Joshua Slocum completed the first solo circumnavigation, a well built and sturdy 38-foot steel ketch. He bought her (the boat that is) in Portugal in Early 2007 proceeded to prep her for the voyage and set sail in December on his first solo ocean passage. Barbara joined him in Fiji after his route through the Panama Canal. Many of you may remember them on the forecourt and as part of the SB20 and Shipman fleets for the summer season last year. At that stage, they had reached half way.

They returned to the boat in New Zealand in early February to do the second half, and set sail for Sydney on the 15th, expecting to arrive 14 days later. Initially, they encountered light airs. We received a radio relay on the 28th: “Arrival delayed until early next week. All well aboard.” They were heading 270 degrees at five knots with a following 25-knot wind.

The next communication received was last Saturday the 4th reporting a “damaged rudder and unable to steer the vessel. There is no immediate concern and both are well aboard.”

An hour and a half later they had decided to continue sailing for Sydney.

The next communication 24 hours later stated, “Captain advises he has no concerns for his safety. Next sked is 0300 UTC 06 March 2017.”

The next communication raised cause for concern:

12 hours later they had missed several scheduled communications. A report from RCC AUSTRALIA was relayed indicating they had been knocked down and were hove too. “RCC AUSTRALIA has not received any EPRIB activation from the vessel.”

confirm wish to abandon the vessel.

At this stage, they had been knocked down several times and had capsized once. They were experiencing 60 plus knots of wind and huge breaking seas.

I rang RCC AUSTRALIA who had just received an EPIRP activation notification from Val. They informed me of the situation and had an aircraft on its way and had asked a cargo vessel in the area to stand off. At this point, they were about 200 miles East of Sydney. Out of helicopter range, and it was getting dark. It was still blowing stink. Communications with vessel broke down as the coms dropped from the aircraft couldn’t be retrieved.

The next twelve hours were pure anticipation and fear. All we could do was wait and hope as the Nemesis made her way to the scene. We were able to follow the movements of the cargo vessel and the plane on the internet. Mad communications going backwards and forwards between us six siblings. I think we are all still living in Australian time.

Meanwhile, Val sat under the lee of the cargo vessel https://www.marinetraffic.com/en/ais/details/ships/shipid:757791

awaiting the arrival of the OPV NEMESIS. https://en.wikipedia.org/wiki/OPV_Nemesis

Finally, I received a call from the UK coastguard at 10 pm (GMT) to say they had been rescued.

They have left their home adrift but thanks to RCC AUSTRALIA they are still with us and in good spirits.

They are hoping to retrieve VAL at some stage and have put up a crowdfunding page to raise the money to do so.

they can be contacted at