Minute’s silence in remembrance of John Moran former employee of the RSGYC. 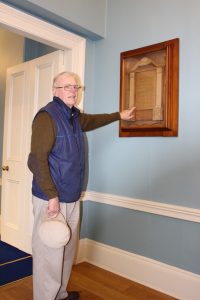 Robert was a guest of the RSGYC on the 100th anniversary of the sinking of the Connaught and loss of his grandfather. This was marked with a minute’s silence.

With the First World War in progress, Connaught was commandeered in 1915 by the British War Office and pressed into service as a troop carrier. Having transported troops the previous evening, on 3 March 1917, Connaught was returning to Southampton from Le Havre. At about 13:45, submarine U-48 fired a torpedo which exploded aft on the starboard side. The ship’s wireless was disabled, so an S.O.S. could not be sent. 15 minutes later, a second torpedo struck amidships on the port side. Three crewmen having been killed, the rest of the crew took to the lifeboats. Connaught sank within four minutes of the second torpedo striking. The sinking occurred in the English Channel about 29 mi (47 km) south of the Light Vessel Owers.

Those lost in the sinking were:

We would like to thank Mr. Moran for allowing us to be part of this special occasion.