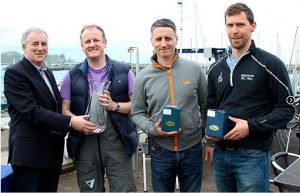 Congratulations to all RSGYC sailors who proudly flew the Flag for the RSGYC.

Particular mention to the newly crowned RS Feva Eastern Champions 2017 Henry Start and Morgan Devine who sailed a superb regatta. Well done also to fellow RSGYC sailors Marcus O’Leary / Oscar Lubliner who were 5th overall and their Club fellow Club members also competing Elysia O’Leary / Lorcan Little in their first Easterns together with Robert O’Connor / Harry Roche all who had a great time. The Feva class is enjoying continued popularity at the RSGYC with the mix of a good double hander boat which promotes friendship along with fun racing and good times ashore.

Congratulations also to Royal St. George Yacht Club sailors Michael O’ Connor and Owen Laverty with Ed Cooke aboard ‘Sin Bin’ who also proudly took the silverware this past weekend in Howth Yacht Club. ‘Sin Bin’ was the overall winner of the  2017 SB20 Eastern Championships at Howth Yacht Club. As is often the case with the SB20 fleet, racing was tight and came down to the final day. RSGYC was also proudly represented by the crews of ‘Timber’ (Marty Cuppage, David Bailey and Chris Chapman)  and ‘Sunday Brunch’ sailed by David Dwyer and crew along with Chris Arrowsmith aboard ‘Sacrebleu’. Full details can be found here on Afloat.ie.

An awesome turnout of sailors, volunteers, and parents at the ISA’s Youth Pathway National Championships this year, with a record turnout for new hosts Ballyholme Yacht Club in Bangor.

The RSGYC was very well represented at the ISA Youth Pathway National Championships this year with 28 sailors proudly flying the flag for the Royal St George Yacht Club in what was a super regatta.

In the hotly contested 420 fleet, the Royal St. George Yacht Club was represented by Kate Lyttle and Niamh Henry who were third overall, with only one point separating them from 2nd place. Grace O’ Beirne & Katherine Kelly sailed a great regatta and were 6th overall out of the 16 boat fleet.

In the uber competitive Laser Radial Class there was a scattering of past champions battling it out in the 43 boat fleet. The Royal St. George Yacht Club was proudly represented by Peter Fagan, Henry Higgins and Hugo Kennedy who finished 5th, 6th and 7th respectively. Followed by Toby Hudson-Fowler and Tara Coveney in 16th and 17th respectively.

Well done to all Royal St. George Yacht Club sailors, you’re Club is proud of you.

Photo Credits to the RS Feva Ireland Facebook page
and to Afloat.ie