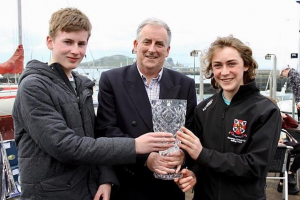 Forty-six boats took part in the combined RS 400, RS200 and RS Feva Eastern Championships at Howth Yacht club last weekend; of this a fleet of 14 Fevas, 4 came from the RStGYC, including the new to class crew of Elysia O’Leary and Lorcan Little along with the new pairing of Robert O’Connor and Harry Roche. The Championship was a very competitive, enjoyable and well organised event with credit to Howth Yacht club and their volunteers.

Six races were completed over the two days in light wind conditions especially on Saturday. The RStGYC teams were well prepared for their first event of the year thanks to Feva Ireland training and club coaches Stephen Craig and Greg Arrowsmith. There were strong performances from all crews with Henry Start and Morgan Devine winning 1st place overall – enabling them to retain the trophy first won in 2016; Marcus O’Leary and Oscar Lubliner finished close behind after winning race 6, coming 5th overall.

The Irish RS class will convene again for racing at the Royal North of Ireland Yacht Club on May 13th and 14th for the Northern Championships. The RS Feva Irish National Championships are being hosted this year at RStGYC 14th – 16th July.