Four Water Wags from the George, Richard Mossop & Henry Rooke’s Water Wag No. 31, Polly, David William’s No. 44, Scallywag, Tim and Gillian Pearson’s No.36, Little Tern, and Vincent Delany in ‘The Centenary Water Wag’ No.33, Eva, put the historic 1887 Water Wag class on the international map, competing in Flotte 7 of this incredible Brittany celebration of traditional yachting and boats. Flotte 7 consisted of classic racing yachts of less than 5m length, which were based at the Pointe of Arradon. This regatta included one thousand four hundred and fifty other classic boats varying from a 4m long replica Viking ship (manned by six wild men) to the 1970, 1974 and 1977 20m long America’s Cup 12 meter yacht France, to tall ships from France and the Netherlands.

The daily temperatures, throughout a week of cruising, racing, picnics, and parades of sail, rose daily until it reached 34 degrees on Friday. However, the high atmospheric pressure had an impact on the winds. Many of our cruising members are familiar with ‘the little sea’ which is the Gulf of Morbihan- and it’s remarkable tides which run at up to 8 knots. The fact that Water Wags generally sail at about 3-4 knots should not have been a problem, as the daily activities consisted of sailing down-tide. However, anybody who overslept, or arrived late for sailing, paid heavily for their tardiness- because they found that the tide turning before they reached their destination, and sailing backwards at  5 knots is quite a frustrating activity.

Every evening after sailing the 30 Wag sailors met up with Howth 17 crews over a pint of wine and the occasional sing-song.  The Wags will compete in this regatta again in two years time. 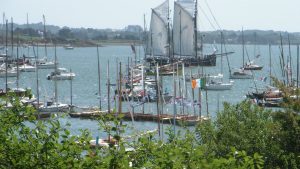