Day One of the Feva Nationals went like clockwork with 4 races completed in light to moderate winds. Throw in 2×180 degree wind shifts as the sea breeze arrived and left 90 minutes later and you have some idea of the day’s activities.
Race One must have been a nervous one for those on the committee boat, such was the bias, that 27 boats arrived at once within a few feet of one another. Tom Higgins and Emily Arrowsmith got away well but were caught by Conor and Jack Galligan downwind with Liam Donnelly and Ben Patterson taking 3rd place. Henry Start and Morgan Devine and Eddie and Kevin Farrell from Llandudno both well recovered from the carnage at the committee boat to take 4th and 5th.
Race Two saw Tom and Emily take the gun with Conor and Jack second. 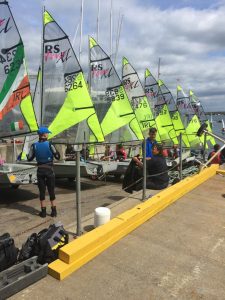 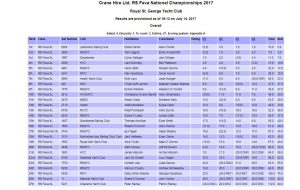 There followed a brief interlude while the sea breeze filled in at 3pm and the Westerly became an Easterly.
For Race Three, the wind was up to 13/14 knots and it was the Farrell boys who shone, reveling in the now planning conditions and showing great skills, they were clear winners with Tom and Emily in second place.
Race four started in similar conditions and after two laps, approaching the leeward mark, the sea breeze had had enough and died away, the leaders drifted around the mark and hardened up to a well it turned out to be a run when the wind finally filled in. The pack caught up and it was an intense final run to the shortened finish. Eddie and Keven kept their cool and won their second race of the day.
The day was rounded off with dinner in the George and lots of prizes.
Roll on Saturday… 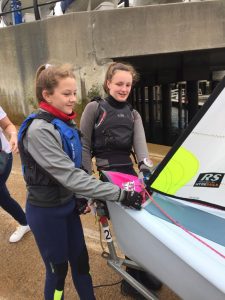 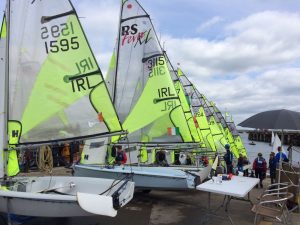