This class is still active in Ireland, in two forms, the original single sail rig, and the later Dublin Bay Sailing Club innovation of moving the mast aft and providing a jib, but with no increase in total sail area. The Royal St. George Yacht Club organised the fifth Irish Championship of recent years, on 2nd September 2018. Entries came from far and wide including one UK entry, one dinghy from Clew Bay and one from Lough Ree. Four races were held in Dun Laoghaire Harbour, two in the morning and two in the afternoon.

Race one was held in 6 knots and George Miller in ‘Pixie’ led from beginning to the end of two laps of the triangular course, with ‘Scythian’ second, and ‘Cora’ third. For race two the wind had increased to 10 knots, and Gavan Johnson in ‘Albany’ led initially, to be passed by Mark Delany in ‘Cora’ who took the gun. In this race ‘Scythian’ had a difficulty with her rig, and in solving that problem, she created another by capsizing! A leisurely lunch was held in the clubhouse, at which point last year’s winner ‘Cora’ held a small lead in the overall standings. George Miller in ‘Pixie’ won race three from ‘Scythian’ in an unstable light wind, and in the final race Andrew Johnston’s ‘Scythian’ took an early lead and won from ‘Pixie’.

For full results see below: 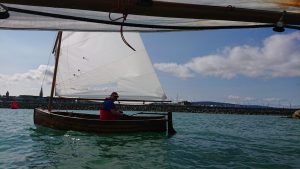 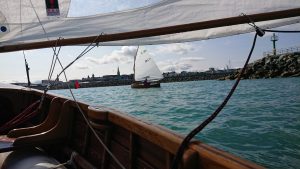