“Curious George” from the RSGYC emerged the winners of the 5th Elmo Trophy sailed in the club this weekend. 22 teams from all over Ireland competed in the event, with most of Ireland’s top youth sailors enjoying sailing with and against each other in almost perfect team racing conditions. Despite a slight delay waiting for wind on Sunday morning, the race team successfully completed almost 120 races over the two days.

After the initial round robin on Saturday, the teams were split into seeded fleets for racing on Sunday. Curious George (Toby Hudson Fowler, Kathy Kelly, Henry Higgins, Isabelle Kearney, Jack Fahy and Emily Riordan) narrowly beat Goats in Boats, led by last years winning captain, Tom Higgins. Showing the competitiveness of the sailing, and how our youth sailors are developing as keen team racers, the next 3 places had to be decided on count backs, with Morgan Lyttles 420 Blaze it just edging ahead of George Clooney (captained by Helen O’Beirne) and Atlee Kohls’ 3 Amigos. First in the Silver Fleet was Harry Twomeys RCYC team.

Raced in four flights for the first time in its 5 year history, we hope this event will grow to a fifth flight and even more teams next year as youth team racing grows around the country. 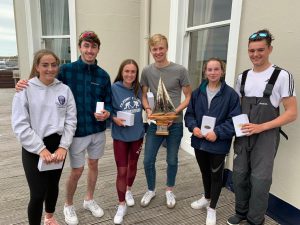 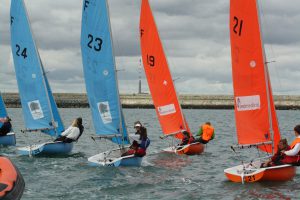 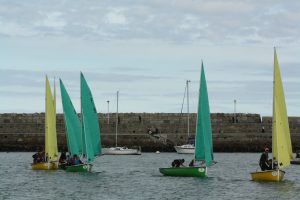