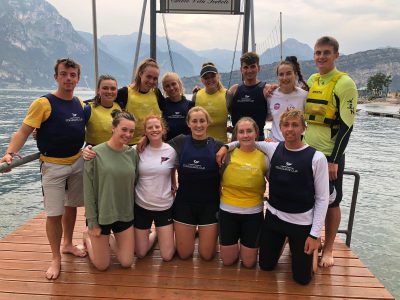 Well done to all the Irish college sailors who took part in the  Laser Performance Collegite Cup (LPCC) on Lake Garda last week. This is an international annual team racing event and the Z420 is the boat used in the competition.

Ireland has sent two teams. A mixed team consisting of Dan Little,  Nicole Hemyrick,  Greg,  Kieran Hall,  Andrew and Aoife Hynes  and an all girl team. Niamh, Kate, Isobel, Emily and Shona are joined by Heather Spain and Iseult Kneasfey from the NYC.

These sailors all learned their team racing skills as teenagers in the RSGYC.  They raced in the annual Elmo Cup and trained on Wednesdays with John Sheehy and other great coaches.  Now in college, they are sailing this week in this prestigious international college competition.

The Elmo Cup will take place in the RSGYC next weekend with 20 teams from all over Ireland competing.  It promises to be a great event.