The Dun Laoghaire Youth Laser training program will be run as a collaboration between RSGYC and NYC but based out of the RSGYC.  With a total of 38 sailors attending the program in autumn of 2019, we are currently the largest fleet of youth sailors in Ireland.  Currently, we have 17 sailors from RSGYC, 12 from NYC and 5 from RIYC in the program, with 10 sailors in radials and 28 in 4.7’s.  The large numbers allow for “big fleet” coaching and also brings a social aspect to the program.  The coaching is designed to prepare sailors to compete in the regional events, trials and nationals.  This spring, we will specifically focus on preparing the 4.7 sailors for the trials at Easter time and the Radial sailors for the Europeans which will be in Ballyholme in early July 2020.  View the Laser events calendar at https://laser-.  Sailors who are graduating from Optimist or Topper where they competed in regional and national events will quickly adjust to the 4.7 and are welcome to join the coaching program.

We are fortunate to have an excellent panel of coaches, including Conor O’Beirne, Henry Higgins, Toby Hudson Fowler and Jack Fahy. We intend grouping sailors to maintain a coach-to-sailor ratio of around seven and expect to have two to three 4.7 groups and one group of radials.  The program will be managed by our coaches and they will be the first point of contact.  The overall philosophy of the group is that it is sailor driven and not parent-driven.  Regular coaching will be on a Sunday morning and we intend having occasional multi-day clinics where possible. 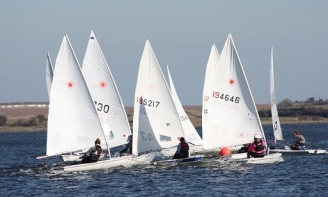 09.30  Sailors rigged and ready for briefing

Further details are available by contacting: