The Annual Lift In, having been postponed due to Civid-19 restrictions, went ahead today with the usual speed an efficiency we associate with the well run operations of the ‘George’. 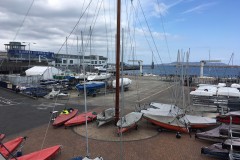 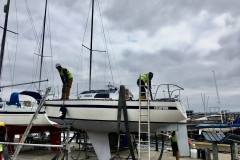 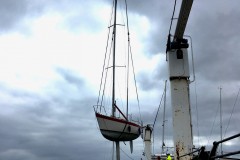 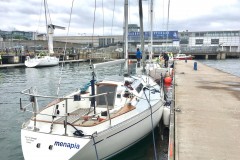 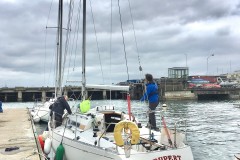 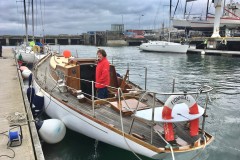 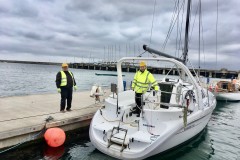 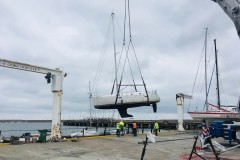 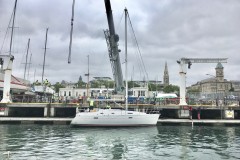 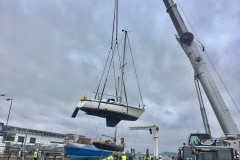 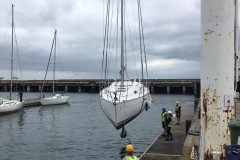 “What a perfect Day!

Today was my personal favourite day in the yearly schedule of the Club, lift in. We had to postpone it from yesterday due to a particularly bad slop with the wind coming from the north. A huge word of thanks to David Freeman, Robert Fowler and the other volunteers for all their work but also in particular I want to thank David for his words of praise for the young team that were assembled to make sure all our members borts were lifted in while their owners could remain safe.

According to David, the team today “was the best team he had ever seen” and they were incredibly efficient. At 9am this morning, having assembled at 6.15am for briefing the lift in was one and a half hours ahead of schedule. At approximately 11am, having paused for breakfast (the first catering offering on site since social distancing was implemented, so well done Jamie and team), we stopped lifting in boats and instead did the pontoon as we couldn’t get in touch with the members whose boats were being lifted in fast enough. Then by 2pm it was all over, done and dusted, a full three and a half hours ahead of schedule. I have to say if this isn’t a roadmap as to how lift ins should be conducted in future then we have all lost the plot.

I cannot express the pride, satisfaction and gratitude I have for Darius, his boat house team and our team of helpers, Sarah and Elizabeth Fogarty, Toby and Herbie Fowler Huson, Sean and Tadgh Donnelly, and Ciaran and Michael Hall sufficiently for the job they did today. Absolutely outstanding work.

Dinghy’s can return from Friday next week onwards, so let the sailing season finally begin!

See you all soon,