In a season like no other, there were some great performances from the RSGYC boats competing in DBSC racing. The ‘Virtual’ Annual awards were held recently which saw over 100 different winners from 22 DBSC classes. Full details can be found on Afloat.ie. 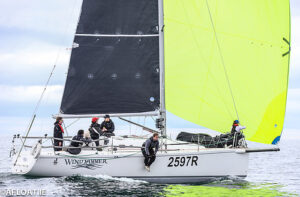 Congratulations to the Premier Award Winner ‘Best yacht in Handicapped series’ Lindsay Casey’s J97 Windjammer that has performed on both inshore and offshore circuits this season . In Cruisers 2  Windjammer won both the Lady Shamrock Trophy for Thursdays IRC racing and the Silver Salver for Saturdays IRC competition. Also in Cruisers 2 was Stephanie Bourke’s Sigma 33 Boojum taking the Brendan Brisco Cup, the Silver Foam Trophy and the Cut Glass Tumbler.  Another RSGYC Sigma Rupert sailed by the Lovegroves was the winner of the JB Stephens Trophy.

In the Cruisers Three division, Kevin Byrne’s Starlet was the winner of both Thursdays and Saturday’s IRC picking up the Sanderling Trophy, the Smalldridge Cup and the Jack Kennedy Memorial Cup along with the Whimbrel Rose Bowl. Kevin will need a barrow to take his trophies home.

In Cruisers 5 the RSGYC Boats also were on the podium with Tom Dunne’s Katienua taking the Gerry Henry Salver for Thursdays ECHO Overall Div A along with Colin O’ Brien and his crew aboard Spirit winning the Ana Livia Trophy for Saturdays A and B ECHO Overall.

The Dragon class saw Phantom sailed by Neil Hegarty, Commodore Peter Bowring and David Williams continue her winning ways taking the RIYC Cup for Saturday racing along with the Old Time Cup for combined thursdays and saturdays. The Torry Cup was won by D-cision sailed by Joey Mason and crew.

The Glens were all RSGYC boats in the silverware with Keith Malcolm’s Glenroan take the Cut Glass Tumbler for Tuesday racing, David Houlton aboard Glendun took both the The McMullen Cup for Saturdays and Thursdays combined along with the Pterodactyl Cup for Thursdays racing.  Saturdays racing for the Harry Maguire Memorial Cup was taken by Vice Commodore Richard O’ Connor along with Lucy Grant and Marcus Pearson aboard Glenluce.

In the Ruffian Class the RSGYC boat Shannagh sailed by Stephen Gill won the Huet Trophy for Thursdays racing.

The RSGYC Shipmans took a clean sweep with Alan Deladiennee’s Poppy taking the Cut Glass Tumbler for Tuesdays racing while John Clark’s JoSlim took the Melindi Cup for Saturday Racing along with the Shipman Perpetual Trophy for Thursdays and Saturdays coombined.

In the SB20 class Ted’sailed by Michael O’ Connor, David Taylor and Ed Cooke continued their winning ways taking The Crichton Cup for Thursdays along with the Saturday SB Cup. Club member Richard Hayes sailing Carpe Diem won the Bealtaine Trophy for the Saturdays series A.

In the Water Wags Vincent Delaney aboard Pansey won the Bluebird Trophy for Wednesdays 2nd Place.

The Fireball 14990 sailed by Ed Butler and Frank Miller swept the Tuesdays overall taking the Nuit St. George Trophy along with the The Fireball Saturday Cup for Saturdays.

In the Lasers Finn Walker took the Sanderling Trophy for his Saturday performance in the standard, while Sean Craig (below) won Tuesdays Overall in the Radial. 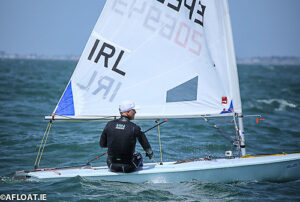 Congratulations to all of the RSGYC winners- well done!

See full results and addtional reports and photos over at Afloat.ie.