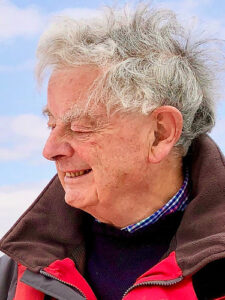 Larry has left us.  He’ll be missed!  The RStGYC was in his DNA and, truly, his DNA is very much in the Club’s bloodstream.  Larry served the Club he loved for many years on Committees and spent no less than nine years at the Flag Table and then held office as a Trustee until just a couple of years ago.  Verily a lifetime of dedicated voluntary service.  Apart from his performance as a flag officer and Trustee, he was in the thick of every project and development in which the Club was involved for almost half a century! His professional expertise was invaluable but also his energy and general astuteness gave inspiration to many, many of us who worked with him on countless issues over the years.

Larry saw the infamous “causeway” come and go; the causeway which threatened to turn the “George” into an “inland yacht club”.  But in its coming he masterminded the arrival of the original club rooms which came into existence under the causeway and gained us some precious territory.  The fact that the juggernauts hammered the club rooms and the poorly constructed causeway into the sea to bring about its going was no fault of Larry’s but it did mean that he was able to point out to the authorities the opportunity of simply dropping the road and supports into the sea (supplemented with the rubble of the Adelphi Cinema!) whereby the Club managed to gain the enormous open standing which we take for granted nowadays.  It’s worth remembering that when Larry started his career in the Club, the limit of the Club’s northern land boundary was roughly where the mast now stands, the trains were still going onto the Carlisle Pier and the St. Michael’s Steps were in active use!

He held a strong view that filling in protected water was not a good idea and he always disliked the idea that nearly half the harbour would be occupied by the HSS ferry port, which has become a white elephant, but he recognised that permanently removing ferries from the Carlisle Pier and the extension of our forecourt amounted to a reasonable trade-off on the issue.

Larry was blessed with a genuinely puckish sense of humour.  In fact, he was a very good humoured man.  I shall never forget one occasion many, many years ago when we were both sailing Dragons.  The Saturday racing had been abandoned because the summer weather had set in with its customers severity but a bunch of us agreed to go out for a spin anyway.  So, three or four Dragons set off for the Poolbeg and up the river where we found an enormous South American sail training vessel was docked and letting people onboard.  We tied up outside her and joined the crowd, which Myles might have described as The Plain People of Ireland, poking around the deck.  However, we were togged out in our Dayglo Henri Lloyds, yellow Wellies etc. Larry quipped to me,

” We’re like the people from Mount Merrion who go to the Horse Show in jodhpurs! ”

So long, Larry.  We’ll see you sometime in Fiddler’s Green!