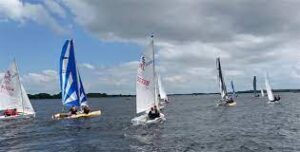 Corrib Rowing & Yachting Club and Galway Bay Sailing Club are delighted to announce The 138th Cong to Galway Sailing Race is taking place this year on Saturday the 26th of June.

For more information, to view the notice of race and to book please click HERE

The History of the Race

The story of Ireland and its west coast is inextricably bound up with sailing and navigation. Archaeologists have discovered boats and artifacts in Lough Corrib dating back to pre-historic times and the arrival of the Vikings. The port of Galway has been an integral link between the Connacht and the wider world since Ptolemy referred to the lakes in the 2nd century and long before Columbus arrived in Galway to recruit sailors. In 1852, the year Sir Benjamin Lee Guinness took up residence in Ashford Castle, the Eglinton Canal was opened connecting the lake and its hinterland as far north as Cong to the sea. The ruins of a planned Cong Canal linking Lough Mask to this system are still to be found in the vicinity of the castle. The arrival of the Guinness family and the works they sponsored provided a much-needed economic boost to the area in the aftermath of the famine. In the late 19th century, it is estimated that there were over 100 sailing boats plying their trade on the lake.

The formation of clubs to foster sailing for pleasure started in 1720 when the world’s first yacht club was formed in Cobh. However, the late 19th Century is often described as sailing’s first golden age. In Galway, the Corrib Rowing and Yachting Club were founded in 1864, the Galway Commercial Boat Club in 1868, and the Royal Galway Yacht Club in 1882. The Honourable Arthur Ernest Guinness was a member of the Royal Galway, amongst other sailing clubs. 1882 also saw the inauguration of the Cong – Galway Race. It was an Annual Race from the Royal Galway Yachting Club premises at the Fisheries Field in Galway to Ashford Castle and back – a distance of 61.5 nautical miles. The race started early and the participants were entertained to lunch in Cong. They also stopped at Kilbeg on the way home. This was a major social and sailing event in Galway until 1914. It never recovered after the First World War and was last held in its old format in 1931.

The second golden age of sailing started in the late 1960s. The first solo round-the-world race captured the public imagination. While Robin Knox-Johnson ultimately triumphed, Commander Bill King was the oldest competitor in Galway Blazer II, called after the famous local hunt. Closer to home, Pierce Purcell, Captain Windham Waithman, and Larry Swan, amongst others, founded Galway Bay Sailing Club in what was then the Corinthian Rugby Club grounds at Lough Atalia. While celebrations of the 50th anniversary have been muted, due to Covid restrictions, many club members are looking to the Cong-Galway race as their first competitive action of the season. As part of this sailing resurgence, the Cong race was revived in 1972 and is now sailed in one direction only from Lisloughrey pier to the finish line above the Quincentennial Bridge. However, it remains Europe’s oldest and longest inland race. It is organised as a collaboration between the Corrib Rowing and Yachting Club, Cumainn Seoltóireacht an Spidéil, Galway City Sailing Club, and Galway Bay Sailing Club to keep alive the traditions which have been passed down through the generations since the days of the prehistoric log boats. The original, historic trophy remains a treasured possession of the CRYC and is presented annually to the race winners.

An interesting manifestation of these traditions is a burgee for a Rear Commodore of the Royal St. George Yacht Club which takes pride of place in the GBSC committee room. It is believed to have belonged to A. E. Guinness, who was Rear Commodore of the Royal St. George from 1921 to 1939. He passed it to Captain Waithmann, first Commodore of GBSC, during their time in the Royal Galway. While A. E. Guinness is most famous for his “flying yacht” Solent, which was a regular visitor to Lough Corrib, and the square-rigged Fantome, he and the family also subsidised steamers running the length of Lough Corrib along the route of the current race. These included the paddle steamer Lady Eglinton and the pleasure yacht Amo II. The name of the latter means ‘I love’ in Latin and is taken from the initials of A. E. Guinness’s daughters, Aileen, Maureen, and Oonagh. It was the last boat to steam through the Eglinton canal in 1954.