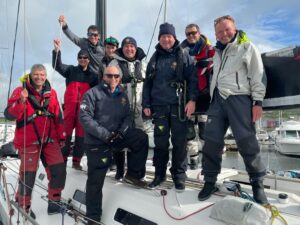 RSGYC Club members Chris and Patanne Power Smith sailed their boat Aurelia, ‘The Golden One’ to a superb 1st place in the Corinthian class in what was a very challenging Dun Laoghiare to Dingle race. Aurelia was 3rd across the finish line and 4th place overall in IRC.

In what was a very tough race for the fleet that had to beat all the way down to Dingle Bay in ‘quite the breeze’, Aurelia showed her class in a very competitive fleet. Aurelia suffered a problem with their top spreader which forced them to throttle back and limp home under her A5 following an in-race repair. 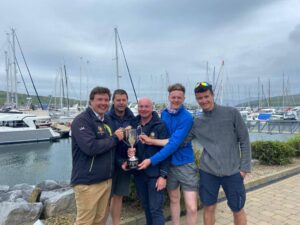 This is a brilliant result for Chris & Patanne representing the RSGYC against the very best of Irelands professional sailors. Chris & Patanne aboard Aurelia regularly introduce our younger sailors to the challenges and joys of offshore sailing and for this race had club member Dan Fitzgerald aboard as bowman, who at 17 years of age may well have been one of the youngest competitors. The opportunity for younger sailors to be involved in offshore sailing and learn a skill for life is a wonderful one, with lifelong memories and friendships being formed.  Also, aboard Aurelia were Club members Dave McGlew and one of our youth sailors Luke Murphy at 23 years of age. Mark O’ Connor aged 22 from the NYC was the other ‘younger’ crew member keeping the D2D veterans on their toes. The race tough conditions were a serious ‘shake down’ for the four crew aboard who were doing their first D2D which no doubt will not be their last.

Congratulations to Chris and Patanne and their crew aboard Aurelia on their win of the D2D race, a super result!

Congratulations also to Springer skippered by Ian Bowring and YOYO skippered by Brendan Coghlan who also representing the RSGYC.