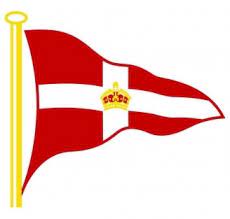 The Royal St George hosted the 7th team racing tri-club competition between the George, Royal Thames YC and the Gareloch’s Royal Northern and Clyde.  The inspiration for the competition was provided by the late Harry Maguire who decided in 2000 after a challenge race against the Clyde that an event should be expanded to three clubs and run to involve senior racers in keelboats. The Thames agreed to join and allocated a significant meter high silver trophy presented by Kaiser Willhelm II for the Race between the German and British Royals (specifically his cousin Edward VII who he never beat). Probably why he started the First World War!! The Trophy is taken from the club vault and shown only whenever the Thames host the event in London.

This year’s event was run in Dun Laoghaire and sailed in the club’s six J80’s crewed by four crew who’s total age has to exceed 160 years with at least one crew of opposite gender and one crew over 55 on each boat. The George fielded a very strong team comprising John Sheehy, Nick Smyth and Andrew Fowler & supporting crews. The Clyde team led by Nichole McPhearson are long time team racing stalwarts of the Clyde and former holders of the trophy. Thames the current holders fielded a solid group of ex Firefly team racers in years past one being Jon Redding of Nottingham Outlaws fame who were multiple winners of the Wilson Trophy in West Kirby.

The George opened their account to the positive early taking wins from Thames and the Clyde. The weather was perfect for the sport and racing continued in sunny and mild 14 knots westerly on the M shaped course skilfully managed by SRO Barry O’Neill and his team. The George continued to rack up wins but Thames came back in a purple spell in the afternoon taking back a couple of points from the George and hammering the Clyde who despite valiant team racing found themselves unable to hold onto precarious winning combinations to the finish line. The team skills improved as experience gained on the water accumulated and match victories pivoted on a place lost or the decisions of the Umpire Team led by Ailbe MIllerick who were kept relentlessly busy in the close manoeuvring. The George however was most artful at turning over results in the last couple of legs giving lessons in coordinated team demolition. After 12 races apiece the teams retired for refreshments, tall tales and gutter boat racing ashore. The George’s tally was an unassailable 8 1/2 wins, Thames 4 1/2 wins and despondent Clyde 2 wins. After overnight gales the teams took to the water again in the eye of the storm sunshine on Sunday morning.  Overall placings were unlikely to change but pride had to be salvaged afloat. Clyde took a race from Thames and ran the George close as did Thames the race lead changing on all four legs alas to no avail.