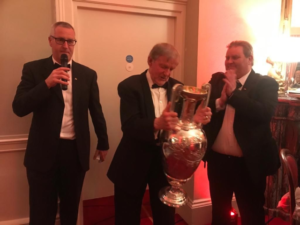 The Jameson Trophy is a very special trophy. It is awarded to a person who has made a significant contribution to the Royal St George Yacht Club during their time as a member or as a member of staff. It is not awarded every year, instead only when someone’s contribution is so significant it cannot go unremarked. In Robert’s case, the trophy could have been awarded to him many times over and for many reasons. A member for more than 50 years Robert has served his fellow members tirelessly whether in his capacity of Boathouse Captain (a position that preceded the creation of the position of Rear Commodore (Sailing)), as the coordinator of the yearly Lift-Ins and Lift-outs, as a launching authority for the RNLI. Or, more recently as an Operational Board member overseeing the constant maintenance and repair of our clubhouse for the last 3 years.

It was an immense pleasure therefore for the Vice Commodore, Mark Hennessy to announce Robert as the recipient of the Jameson Trophy at the recent St Georges’s Day Dinner in the club. Pictured above is the moment immediately after the Commodore, Richard O’Connor awarded him the trophy and we feel it captures the emotion of the moment perfectly. Robert’s surprise and modesty being typical of the man.

Congratulations Robert and thank you for everything you have done and continue to do for our Club and its members.