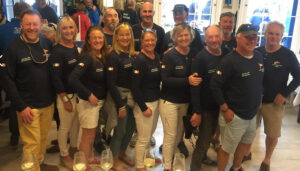 Ireland was also represented on the water by our International Judge/Umpire Michael O’Connor, from Kinsale.

This is one of the most popular regattas on the popular EuroMasters circuit which attracts over 700 ILCA sailors to various wonderful venues each year. For this regatta, hosted by the hospitable Club Vela Calella, there were 64 ILCA 6s and 34 ILCA 7s. 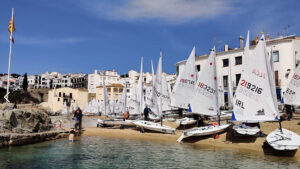 Sailed in glorious sunshine throughout and very pleasant temperatures, the regatta began on Thursday, April 28 with an epic practice race in 15-20 knots, followed by Day 1 proper with 3 races in 10-14 knots but, by the weekend, competing weather systems left the venue windless and only one more race was possible on the Sunday. So Friday was key and, despite a very one-sided first beat, results were very up and down as starts were congested (especially with the 6’s) and finding lanes on the favoured port lay line was absolutely treacherous.

The Irish squad proved that the vibrant local Masters’ scene means our sailors are very competitive and all acquitted themselves well. Off the water too, where the team represented the second-largest contingent after the hosts, among the 13 countries represented!

In the ILCA 6’s, Monica Azon claimed first overall for Spain, proving her pedigree as a dual Olympian from 2004 and 2008. She was pushed hard by Max Hunt (GBR), very well known for his specialist ILCA parts business. Next were Dutch and Mexican competitors (the latter preparing for the Master Worlds in Mexico in June) and the top 5 was rounded off by Sean Craig (RStGYC), a result which also gave him a podium 2nd in the 28-boat Grand Master category. The next best of the Irish was Judy O’Beirne in 28th overall (and 6th lady overall), followed by Sean Flanagan in 32nd, Shirley Gilmore in 34th, and Michael Norman in 37th.

In the ILCA 7’s, the Spanish dominated, taking the top 6 overall and the great Jose Luis Doreste (470 Gold in 1984 Games and Flying Dutchman Gold in 1996 Games) didn’t actually make top three. Best of the Irish was Theo Lyttle in 17th overall who had the satisfaction of a win in the Practice race.

The 2022 ILCA Master European Championships will take place not far up the coast from Calella de Palafrugell, in October, at L’Escala. A strong Irish team is expected to compete.

Results of the 2022 Spanish Masters can be accessed HERE