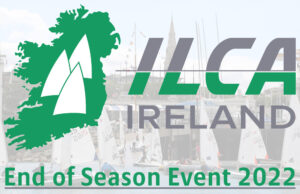 We’re delighted to announce that the club has been chosen by ILCA Ireland to host their End of Season Event 2022, taking place on September 24-25.

The two-day End of Season event is the final ranking event in the 2022 calendar for ILCA Ireland.

In addition to overall fleet prizes for ILCA 7 (Standard), ILCA 6 (Radial) and ILCA 4 (4.7), there will be category prizes as follows:

As with all other regional events this year, ILCA Ireland sailors between the ages of 18 – 30 can participate in this event for free by simply registering for the event in the normal way and selecting the appropriate age option.

As many of you know, our fellow member, ILCA Laser sailor, and friend Kevin Doyle was injured during a recent regatta. Along with ILCA Ireland, we are now trying to raise funds for him and his family for his care. Proceeds from the upcoming ILCA Ireland End of Season Event hosted by the Royal St George Yacht Club will be placed in a fund to support Kevin’s care needs over the coming months.

The club has initiated a GoFundMe campaign here where members can make donations.