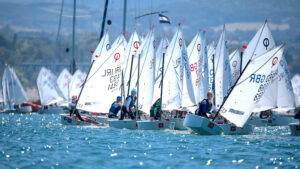 After the dust settles on what can only be described as an epic Irish Optimist National Championships, we can now reflect on the incredible successes of the Royal St. George sailors and the amazing event that we have just witnessed.

In the fifty-five boat Senior Main Fleet, we had three boats in the top five overall, namely Conor Cronin in second, Caoilinn Geraghty-McDonnell in third, and Jules Start in fifth. In the Senior Main Bronze division, we had two sailors in the top five, namely Susanna Bloomer in second and Elizabeth Lyster in fifth.

In the seventy-boat Junior Main Fleet, we had an incredible four boats in the top five of the Silver division, namely Emily Donagh in first, Ella Rock in second, Maeve Donagh in third, and Finn Foley in fourth.

In the thirty-six-strong Regatta Racing fleet, after ten races, the George had two sailors in the top ten, namely Oliver Ryan in second and Matvey Sorgassi in ninth.

We wish to thank our sponsors, Avolon, Grant Thornton, and SeaChange Now, without whom we would not have been able to host an event of this scale. Huge thanks must also go to Vodafone, A Stitch In Time, and Viking Marine for their generous daily draw prizes, which went down a treat with the sailors. Massive thanks to DLRCOCO for access to the Carlisle Pier which was vital to house the two hundred boats and trailers.

Huge thanks to the staff of the Royal St. George, including Sailing, Boat House, Reception, Bar & Catering who went above and beyond to make this event so enjoyable for our competitors.

Lastly, but by no means least, I would like to thank the seventy-plus volunteers that have been working tirelessly for the past three months to make this event happen. You know who you are and we are forever indebted to you. Thank you, thank you, thank you!