Over 120 junior and youth sailors along with their parents gathered at the Royal St George for the annual prize giving. It was the first time since the covid years that the dinner and awards ceremony had been run and there was an electric buzz in the air with many junior sailors having their first experience of a big club dinner.

Robbie Walker Junior Organiser opened the evening with a huge thank you to all the club volunteers, instructors, coaches, parents, and staff that helped to run exceptional events this year including the Elmo Cup, the Optimists National, the ILCA Nationals. Special thanks went to Kate Fogarty (Rear Commodore Sailing) and the other flags for their super support of youth sailing. To avoid a long-drawn-out prize giving, a set of prizes was awarded before and after each course.

The Manna Cup was next presented to a team or person for the best asset to the club. The winners were ‘Team George’ who collectively represented the club at the Irish Sailing Junior Champions Cup competition recently held in Schull, where junior National champions all raced each other. 12 gold medals and the cup were awarded to the team which included the event Champion Fiachra Geraghty Mc Donnell. The George team placed: 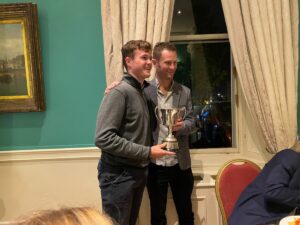 As the evening moved to the fleet prizes the sugar and food were taking full effect in the junior audience and the decibels were rising! The ILCA class led by class Captains Michael Ciborowski and Gus Legge awarded prizes to best boy and girl in each rig size.

In the ILCA 6, best Boy was Fiachra McDonnell, and best Girl – Sophie Kilmartin. ILCA 4’s had

Best Boy – Daniel O’Connor and Best Girl – Ava Ennis, while in the ILCA 7 there were only male sailors and 1st was Kei Walker and 2nd Mark Henry. Spirit of ILCA was one of the most popular awards with huge cheers for both Zita Tempany, new to the fleet and showing great promise, and Brian Carroll everyone’s favourite ILCA sailor. 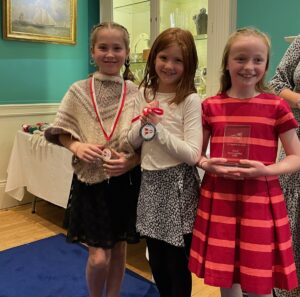 All those who did ILCA Worlds were recognised with a medal: 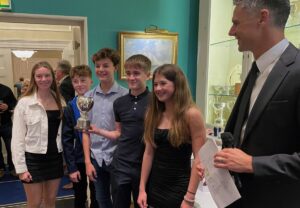 The noisiest and the most fun class was up next with the Optimists. Class Captains Brendan and Sarah Foley, supported by Gavan Murphy, Barry Murdock and Paul Molloy called out the following for prizes in what was an exceptional year for Optimist sailing in the club which included the highlight of hosting the National Championships. Winners were:

The RS Feva class is undergoing a revival with sailing in the class now happening all year and plenty of ex-Oppie sailors joining those already established in the boat. Coaches Henry Higgins and Henry Start have really upped the levels and great results are being seen. Under the support of Class Captain Keith Start – great plans are afoot for this very important double handed class. Winners on the night were;

The 29er fleet from the club were represented in spectacular style by some outstanding results from our female sailors. Demonstrating their talent on the international stage the female teams raced around Europe to come back with many prizes including;

Finally, the team racers which are a huge part of the history and the culture of the Royal St George were well represented by many youth teams that competed in the ELMO cup hosted by the club. This event saw over 120 sailors all under the age of 18 compete and socialise. An award was made to

A special prize for developing team racing was awarded to Max O’Hare and Jules Start.

At this stage of the ceremony, the ice creams had been served and the sugar levels put paid to any further attention. The DJ kicked in and general fun was had by all.

Well done to all involved!

Recognition to all world champs’ participants: