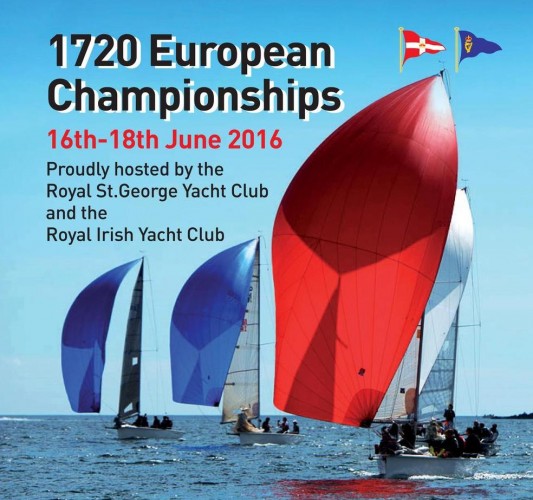 Join us this June for the 1720 European Championships!

We would like to invite you and your team to Dun Laoghaire for the 1720 European Championships which will run from the 16th – 18th June. This event is proudly being hosted by the Royal St. George Yacht Club and the Royal Irish Yacht Club in association with the National Yacht Club. The event is generously being sponsored by North Sails, McWilliam Sailmakers, and Viking Marine.

The event PRO will be Con Murphy and we expect world class racing and hope that you and your crew will be able to join us for the event.

To facilitate visiting boats we can accommodate early arrivals and delayed departures as required and with prior arrangement with the Clubs. We will have complimentary Crane Lift in/Out facilities here at the Royal St. George and the same at the Royal Irish Yacht Club and will endeavour to get you launched and on to the water as soon as is reasonably possible upon your arrival. Don’t forget your lifting straps, slings, and fenders. After racing on Saturday, we will also be able to get you out of the water as soon as you are ready to be lifted.

We expect quality race courses and racing on the water and of quality ashore, too, with each evenings’ Après Sail & Prize-giving planned. Thursday Après Sail & prize-giving will be hosted by the Royal Irish Yacht Club with a complimentary Pimms reception. There will also be a full BBQ with a pig on a spit available. Friday Après Sail & BBQ will be at the Royal St. George Yacht Club where the renowned ‘George’ BBQ‘ will be available for hungry racers after sailing.

There is plentiful accommodation in Dun Laoghaire with two hotels within walking distance ( The Haddington – http://www.thehaddington.ie/) and The Royal Marine http://www.royalmarine.ie/) along with Bed and Breakfasts in the area.

Available in the harbour for €5 p/ day.

Available during the event and before/ afterwards with prior arrangement with the RSGYC or RIYC.

Complimentary as part of the event with prior arrangement.

I will look forward to welcoming you to Dun Laoghaire for the event, please feel free to contact me if I can be of any assistance.

Be sure to book your place before it’s too late!

Image provided by Aedan Coffey, whose images can be found at aedancoffey.com