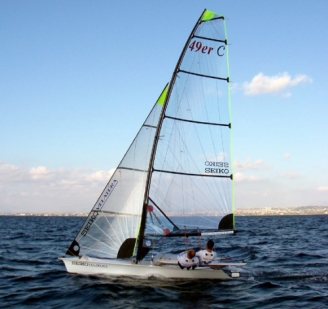 A history of the foundation of the 49er Class

In September 1996, a group of top-flight sailors travelled from around the world to Lake Garda for a trial of many different classes, to see which would go forward as the new twin-trapeze skiff for the Olympics in Sydney 2000. There were a number of new designs to consider, including the Laser 5000 and the Nautivela Jet, as well as a few older classes that had been revamped to do battle in the twin-trapeze arena, boats such as a Flying Dutchman modified with bowsprit, asymmetric spinnaker and an extra set of trapezes. However, after an intensive week of trialling these various designs, the 49er proved to be the clear favourite with the sailors, and by November 1996 it had been ratified as the new Olympic skiff.

The task now was to meet the immediate global demand for so many 49ers. As with any Olympic class, the busiest market would be Europe and the job of churning out consistent, reliable 49ers in Europe would go to Ovington Boats, based in Tynemouth in the north-east of England. Dave Ovington ' or Ovi to his friends and colleagues - had been building hi-tech boats such as 18-foot skiffs and International 14s for many years already, so he seemed the ideal man for the job.

The first year of production was manic, with an eight-month waiting list developing within a matter of days of the 49er's Olympic future being confirmed at the ISAF Annual Conference in November 1996. Ovington and the other builders around the world worked at full capacity for the first year, and for the class's first international regatta - the European Championships held in Weymouth in September 1997 - there were already 80 boats competing.

The 49er had become an overnight success. And 10 years later new 49ers continue to roll out of the Tynemouth factory ' but without Dave Ovington at the helm. Ovi's sudden death last year shocked the sailing community and left the boatbuilding company without its figurehead. Now Ovington Boats is being run by a trio of experts, each responsible for their own area of the business. Veronica Brown holds the purse strings, and she has been Ovington Boats' accountant for years; Dave Hall is responsible for sales and marketing, a role he has held since 1998; and Chris Turner was signed up as the boatbuilding expertise, his knowledge of hi-tech construction an invaluable asset to the company in the absence of Ovi's expertise.

It is hard to overestimate the impact that Dave Ovington had on the business, and Dave Hall admits that the past year has been tough emotionally. 'It was terrible when Ovi died. He was such a great guy, such a driving force here, how do you deal with someone like that disappearing? But actually the biggest thing we noticed since then is how the sailing public carried on as normal. They've kept their faith in Ovington Boats throughout. For the past 18 months, we've been flat out. We're still turning out the boats. We've got the same skilled people building the boats, their enthusiasm and loyalty is amazing. Very few of our people sail, which is probably a good thing because they'd take too much time off! But they're very proud of the quality of boats that they produce.'

Ovington Boats consists of 15 people, and aside from a steady production of 49ers, it makes other dinghies and small keelboats such as the International 14, the 505 and the Flying Fifteen. By far the biggest thing for the company right now, however, is the 29er, the smaller cousin of the 49er. Dave Hall estimates that the company's production of 29ers in 2006 will exceed 170. 'It really is full-on. We've got a waiting list of more than two months for the 29er,' says Dave, who anticipates production remaining high for the foreseeable future, with the lightweight skiff set to be the doublehanded class for the next two ISAF Youth World Championships in Canada and Denmark, and quite possibly for Brazil in 2009.

As if that weren't enough to keep Dave Hall occupied, there is the recent arrival of the 29er to keep him on his toes. A suped-up 29er with twin trapezes and a bigger rig and sail plan, Julian Bethwaite has designed the 29er specifically with the aim of becoming the women's Olympic double-handed skiff. Whether or not that happens depends a good deal on politics, but the 49er and 29er have already laid the groundwork for its acceptance.

It's hard to imagine that a boat that looks so up to date as the 49er has been around for a decade already. Almost a thousand boats later, it has become a modern design classic. Dave Hall comments: 'The 49er is the boat by which all others are judged, and it has changed the face of sailing. It has brought skiff sailing to everyone. We've got boats that match today's era, they look appropriate for the 21st century, and they bring high-performance thrills for low cost and very little maintenance.'

Carlingford: The Scene of Epic Battles All Weekend

2014 – A Busy Year Ahead For ISA Performance Sailors